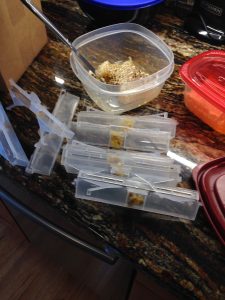 rch 19th was 78 degrees.  Again, way warmer than normal for us.  We have been having spurts of warmer than usual weather, followed by normal weather.  It has been cool at night, sometimes below freezing.  I think we have had just enough cool weather to keep the bees from trying to raise too much brood.  At the same time it has not been so cold that they over taxed themselves keeping the brood warm.  I checked the hives today and I found brood at all stages: Eggs, larva and capped pupa.  We have been having this on and off unseasonably warm weather for 5 weeks now.  It takes honeybees around 3 weeks, 21 days, to go from eggs to emerging new adult bees.  So potentially there is already 2 weeks worth of new bees in each hive to help with the brood that is being raised now.  Every day the chance of really cold weather gets less and less.  So I am not as worried as I was about the bees freezing because there was too much brood they had to try to keep warm in a cold spell. 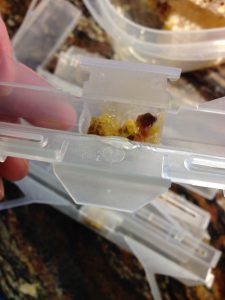 The last time I checked the hives I noticed one of them had lots and lots of adult small hive beetles in it.  They were running around on the same frames as the bees.  No doubt they were keeping warm by hanging out right in there with the bees all winter.  Small hive beetles are not too big a deal in their adult phase, but the larvae make a mess by eating honey and pollen and causing the honey to ferment.  I am not sure when the adults will start laying eggs but I want to get rid of as many adults as I can before that happens.  I recently read that the Small Hive Beetle Jail (www.dadant.com/catalog/m01543-baitable-beetle-jail-trap-each) can be baited with honey and pollen.  The adults are attracted by the smell and the jail/trap is designed so the bees can’t get in and the beetles feel like it is an escape from the bees.  I have some honeycomb that happens to have some cells of pollen in it.  I thought I would try this out. 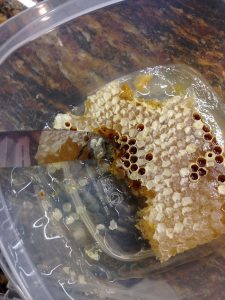 I cut one or two cells of pollen out and put them in the center bait area of each trap along with the wax and honey surrounding the pollen cells.  I added these to the outer edges of the beehive boxes, just outside of where the bees are clustered.  The beetles look for hiding places away from the bees so this looked like a good spot.

These photos are of the Small Hive Beetle Jails that I removed to make room for the freshly baited ones.  These were in the hives all winter.  There is food grade cooking oil on each side of the bait area and the beetles basically slip into the oil and can’t get out.  Since there are no chemicals in these traps I felt is was safe to leave them in all winter.  As you can see they did catch quite a few beetles! 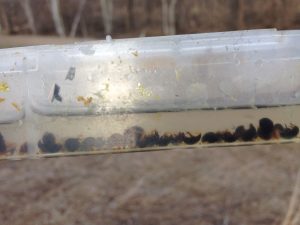 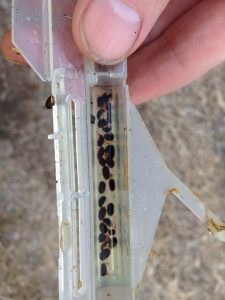 Just over two weeks have passed and I went and looked at the beehives and checked the Beetle Jail traps.  There were only 2 or 3 beetles in them!  That is out of 10 traps!  Maybe the honey and pollen is not as good a bait as I had heard.  I will have to re-bait some of the traps with a piece of an apple and compare the results.
[jetpack_subscription_form]